Please read this before downloading, playing, or sharing your thoughts!

September 2021 Update: I've temporarily removed the download link to the pre-pre-alpha because Aero GPX has changed quite a bit since this old release. I intend to release a new preview/demo at some point in the future. Thank you for your support!

For the latest footage, updates, and community hang-outs please check these places! Thanks!

I've been working on my love letter to the F-Zero franchise somewhat silently in the dark for the last year and a half or so, and I feel that now is the time to share my progress and see how everyone thinks it plays. Game feel is extremely important to me, and I want to know if I'm on the right track, so I decided to release a public handling test to get as much feedback as I possibly can.

What this project is intended to be: A game that is meant to pay homage to the hardcore side of the Anti-Gravity Racing genre that basically no other game has tried to do; there have been some, but as a long-time fan of the F-Zero franchise, nothing else that has ever come out really "gets" what makes F-Zero stand apart from everything else. Visceral, precise, fast, and responsive gameplay are the main hallmarks that I have tried to capture in my game so far.  Track style and design also play a huge part in this (character and world too, but that will come in the future) and are aspects I wish to capture as well when the time comes.

What this project is NOT intended to be: A total, 1-for-1 clone of F-Zero. I wanted this to be my own spin on the gameplay style of F-Zero, capturing what I feel are the most important aspects of it while still setting itself apart. I'm taking this approach because I do intend to flesh this out into a full game that is more my own than anything else. It is not meant to feel exactly like X or GX, and while I know that might disappoint some hardcore fans, I really am confident that my game is still extremely faithful to them while being different, and I hope you will feel the same way once you try it!

This is a Windows 64-Bit build of my game. It is only meant to run on Windows systems. Hardware requirements are fairly low, and can even run on most devices with just integrated graphics. HOWEVER; the game is ONLY compatible with Xinput gamepads so far; I have not built in support for anything else. Not even much keyboard and mouse support. This is as early as something can get, so I haven't spent much time on QOL features like that. If you have a controller that uses another control standard, you will have to use a third party program to get it to communicate with Unreal Engine 4 properly. There are plenty out there.

There is a basic controls menu to give an idea of how to control the machine, and it allows to to change the layout of some buttons. It's pretty barebones though, so it doesn't warn you if an input is used multiple times. So be careful!

If the game starts in Windowed mode, hit F11 in order to make it go to full screen. Once in game, you can hit the "P" key in order to get a framerate and frametime readout from Unreal Engine 4. I would recommend doing this if you wish to share performance details with me.

If you encounter any bugs or crashes trying to run the game, you can let me know. However, I do not intend to release any fixes any time soon. It runs fine on all the computers I have tried so far, so I don't think you should have any issues honestly. However, if you do, I'm sorry. I'm a solo developer, and these things are difficult for me to anticipate and fix.

The game is EXTREMELY early. Everything visual is placeholder. All audio is placeholder. If you encounter bugs or strange behavior, it's likely that I know about it and it's something that's on the list to fix or improve in the future. Still share bugs, thoughts, and concerns with me though! That's what this is all for. Join the Discord to follow and participate in the development of my game or Contact me in the places below:

Hey! Long time no post. My bad. Turns out learning a programming language at the same time that you are re-writing your game in that very language can be extremely difficult and time consuming, but I persevered! The game is now in a very "pre-alpha" state, with a lot of the main features represented in some capacity. 5 tracks, 30 machines on the track, and a ton of speed!

There is no music yet, so throw on your favorite tunes before you load the game up! Also, the game audio might be loud. You might have to adjust the volume using windows 10, as I haven't implemented a global audio class that allows me to lower the volume across the board. Sorry! The game is still very incomplete. If there is something that you think is broken, missing, or rough, it's likely that it's something that will eventually be added or changed. Still let me know though! It's getting there! I'll probably continually update this as I think of more. All technical details above still apply; you will need Windows 10 and an Xinput capable controller to play the game comfortably! Thanks for your support, please enjoy, and hit me up in the below places to let me know what you think!

Also feel free to comment on this page with your thoughts and feedback!

September 2021 Update: I've temporarily removed the download link to the pre-pre-alpha because Aero GPX has changed quite a bit since this old release. I intend to release a new preview/demo at some point in the future. Thank you for your support!

"A game that is meant to pay homage to the hardcore side of the Anti-Gravity Racing genre that basically no other game has tried to do; there have been some, but as a long-time fan of the F-Zero franchise, nothing else that has ever come out really "gets" what makes F-Zero stand apart from everything else. Visceral, precise, fast, and responsive gameplay are the main hallmarks that I have tried to capture in my game so far."

As a huge F-Zero fan, I'd just like to say Amen and godspeed man.

Can't wait to try this out, definitely following with anticipation!

I'm really excited about this. As someone who played F-Zero GX to death, I can say that you somehow managed to get really close to the feel of it's tight, precise control. I can imagine it's really tough, but I think you're close to nailing it.
Using an 8BitDo adapter, I'm able to play this game with an actual Gamecube controller as if it were an Xinput device. When a way to rebind the controls gets implemented, it'll be perfect.
I'll be keeping an eye on development!

feels good, but I do miss the feel of tapping accelerate around a corner

have you heard of the game Fast RMX ?

Of course! It was the second game that I got for my Switch. I loved it! Shin'en are a talented group! 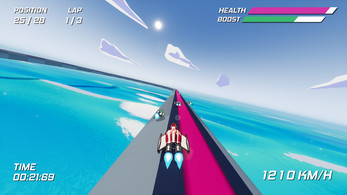 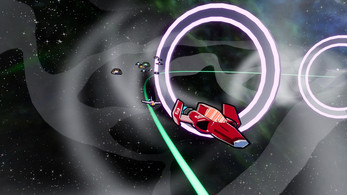 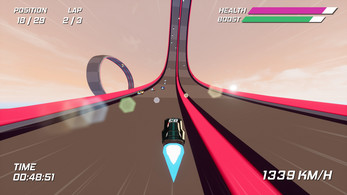 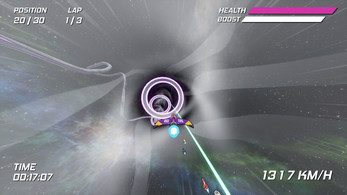 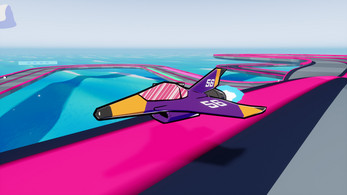